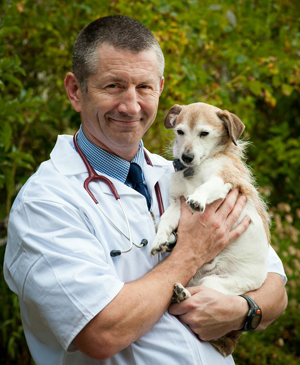 Dr. Russell grew up in Victoria graduating from the University of Victoria with a Bachelors of Science. In 1995, he traveled out to Saskatoon to attend the Western College of Veterinary Medicine. After four very cold winters on the prairies, he graduated with his Doctor of Veterinary Medicine degree in 1999. Quickly, he and his wife returned to BC. His first position in Surrey which lasted for just under two years. After experiencing the lower mainland there was a strong, compelling desire to return to Victoria. He took a position at hospital in Saanich where he practiced on large and small animals. At certain times he certainly felt like James Herriot, practicing on sheep, goats, cattle, horses, the odd chicken, rabbits, guinea pigs, even a bearded dragon, dogs and cats! After 11 years practicing in Saanich he moved on out to Langford. While practicing in the Westshore he met many wonderful pets and their owners. After two years the desire to step out on his own finally came to fruition.

Dr. Russell is married and has three wonderful children, along with his new French bulldog cross pup. Digbey is a constant entertainment for the whole family. His full title and name are: Barnaby Digbey Russell, AKA Milwaukee Dan, explorer, archeologist and wild cat hunter! Along with Digbey a new rescue Frenchie has been added. The Revolution continues! Gomer ( AKA Gomez, Gomie Bear or as he thinks his name is “treat”!) was added to the family. Gomer and Digbey are fast friends, running through the house and wrestling at all hours.

Although Dr. Russell is quite busy with his family and new business he finds time to practice Aikido.http://ueshibaaikido.com. He has been known to say “I love to learn, I could listen to lectures all day, its the exams I hate!” 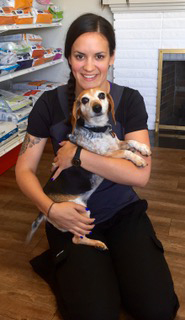 Kristyn graduated from the Animal Health Technology Program at Thompson Rivers University in 2012. She worked in wildlife rehabilitation before moving to Victoria. Since moving here, Kristyn and her husband have adopted Olive, a beagle cross, and Theo, a tuxedo cat! 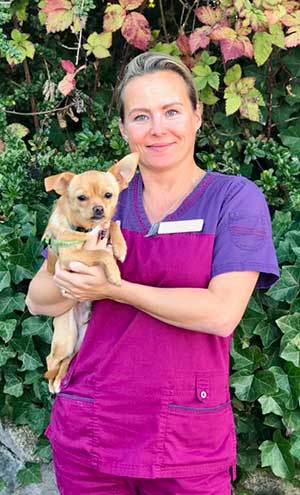 Allison has worked in the Veterinary Industry for over 12 years, and at Grace Vet since we opened. She was involved in 4-H raising and showing cattle prior to working with animals as an occupation. At home, she is busy assisting her fiancé Ty with his business, keeping her son Ayden active and busy, and two rescue dogs "Norman" and "Chad Wilson". She enjoys spending quality time with her family and friends, and playing softball. 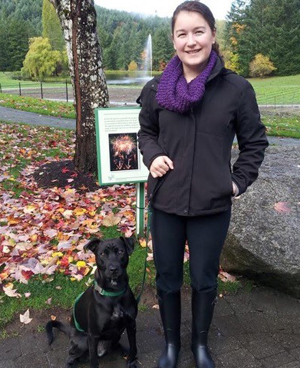 Kristina has been with Grace vet since 2015. She graduated from UVic with a B.A. in History and English; during that time she realized she wanted to work with animals as a career. She has a special interest in dog behavior and training. Kristina and her husband have three dogs, rescues Sophie, and Maggie, and Dotty the border collie, two cats, Storm and Roger, a few chickens, and a young daughter Rosie. 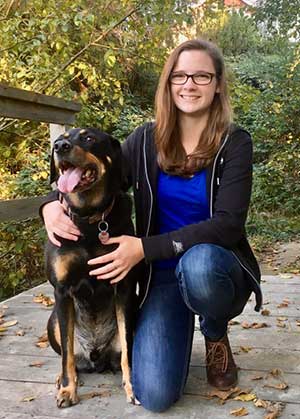 Emily is currently studying Biology at the University of Victoria in order to get into Veterinary Medicine. She was born and raised in Victoria, and when she is not working or studying she enjoys hiking, baking amazing treats, and painting. She has 1 dog named Scout and 3 fish. 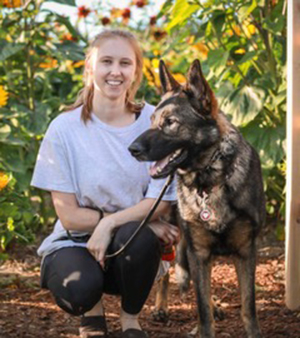 Sheila joined us in 2021. She previously worked as a local dog groomer before making the jump to vet med. Sheila has a german shepherd Jordan and a few budgies. On her days off, Sheila enjoys training and exercising with her dog, and being active outdoors.

Brie joined us in 2019. She is currently attending TRU in the Animal Health Technology program. Brie has always wanted to work with animals, and previously volunteered at Mary’s Farm and Sanctuary, which solidified her resolve and led her into veterinary medicine. Brie has two cats Roger and Roux. In her free time, she enjoys reading, learning astronomy, hiking, and relaxing with family and friends. 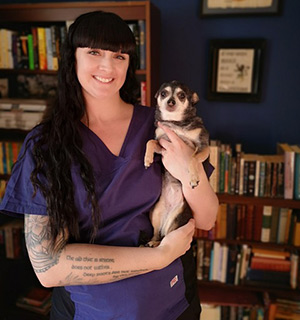 Brandi joined the Grace team in 2020 and brings with her over 11 years of experience in the veterinary industry. She will treat your pet as her own and has a special interest in wildlife rescue. Brandi shares her home with her husband, chihuahua, and two cats. When not at work you will find her with her nose in a book, gardening in her yard, or foraging locally for a variety of plants and mushrooms.

Brandy was born and raised in the Comox Valley. She has always been an animal lover and has two cats, Sophie and Bentley, and a dog named Chela. When she is not working she enjoys doing many different crafts and adventuring around the island.

Liana has been a member of the team since early 2019. She has been an avid animal lover since childhood, and completed a diploma for Medical Office Assistance in 2016. She enjoys volunteering at nearby animal shelters, and is a proud mom to a hamster named Petunia and 35 house plants. She is happy to answer any questions you may have, and always has extra cookies on hand for fluffy visitors.